Animals, big and small, adorable or ugly are God’s wonderful creations. Nevertheless, each kind is created with unique features that best describes themselves.

Here are the 21 weird, mythical and wonderful creatures that actually reside in our planet.

The leaf-tailed gecko is a master of disguise found in Madagascar. With a leaf-shaped tail, it can blend into dense jungle.

Now, can you spot the lizard in this image?!

The aye-aye is a nocturnal lemur native only to Madagascar. The creature has rodent-like teeth which it uses to chew small holes into trees and then uses its narrow fingers to pull grubs out.

The colorful mantis shrimp spends most of its life tucked away in burrows and holes, meaning that we know very little about them. Ancient Assyrians referred to the creatures as “sea locustus”, while more recently they have been called “prawn killers” and “thumb splitters,” because of their extremely powerful claws. The shrimp is capable of breaking through aquariums by moving at speeds of up to 50 miles per hour.

This barreleye fish, found at depths of 2000 feet in the Atlantic, Pacific and Indian Oceans, is most notable for its transparent head and highly sensitive eyes. The green lenses above each eye allow the fish to filter out what little sunlight makes it down to these depths and focus on the lights of its prey.

David Attenborough once remarked that these marvelous monkeys look like “elves” and others like “plastic surgery gone too far.” Found in Asia, at heights of up to 13,000 feet, these primates with a short stump of a nose are rarely spotted. 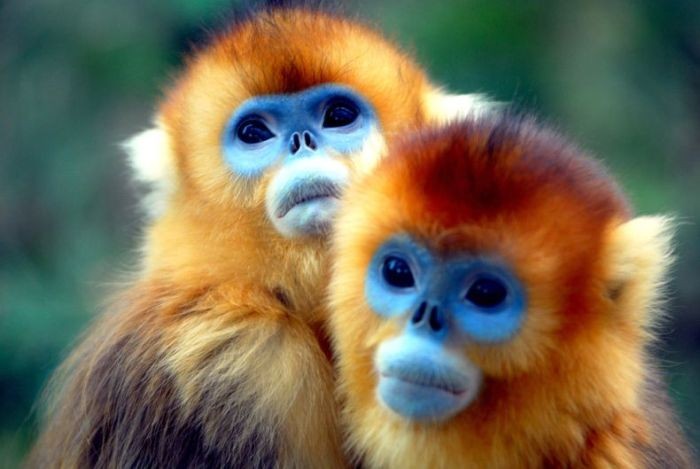 Only recently discovered in 2005, not much is known about this hairy crustacean found in the South Pacific Ocean.

These 20 foot long lizards weigh in at 350 pounds and used to dominate all major river systems, where their long, thin jaws proved adept at hunting and eating fish. Overfishing by humans has seen these reptiles reduced to 2% of their former strength.

In the waters of the Atlantic and Pacific Oceans this prehistoric beast boasts 300 trident-shaped teeth, aligned in 25 rows to rip through any prey. Scientists also believe that the frilled shark breaks the record for gestation periods amongst sharks, taking three and a half years to give birth.

The Gobi Jerboa is a species of rodents found in China and Mongolia. Jerboas have kangaroo-like hind legs which make the creature an amazing runner and jumper. Along with disproportionately large ears and tails, which enhance hearing and balance, this is a truly bizarre creature.

Enypniastes is a deep sea cucumber which leaves nothing to the imagination and lives at depths of up to 16,400 feet. The red area is the animal’s mouth. Around it are tentacles, which scoop up edible mud from the seafloor. From there, it enters the creatures gut.

In what is many people’s worst nightmare, this serpent climbs trees and then jumps down. By flattening its body and flaring out its ribs, the snake can glide through the air.

While the name would have you think otherwise, these fish are far more vicious than they are sarcastic. Found in the waters off the West Coast of America, fringeheads can grow 12 inches long and have eerily large mouths, which they press up against each others, as if kissing, to assert authority.

Native to South America, the leaf-like appearance of the surinam is a natural defense against predators. The toads have a unique breeding method, where the male plants fertilized eggs into the back of the female who carries them until they emerge from pockets in her skin.

These turtles with a rather literal name can be found throughout Australia. Their remarkable necks can reach the same length as their shells, or around 10 inches.

These beautiful birds inhabit Everest, the Himalayas and other mountainous regions in Europe and Asia. They were nearly eradicated because people used to fear that bearded vultures would attack lambs and children, and now, the WWF estimates only 10,000 are left.

It can be difficult to believe, but these “rocks” are living, breathing organisms. Their appearance allows them to blend into Chilean beaches and avoid predators. Interestingly, these creatures have both male and female organs and can breed individually.

The saiga is a critically endangered antelope that inhabits the Eurasian steppe, including Dzungaria and Mongolia. Its strange nose is extremely flexible and helps to filter out dust kicked up by the migrating herd.

Irrawaddy dolphins are found in coastal areas in South and Southeast Asia. These animals are known for their bulging forehead and short beak, giving them a far stranger appearance than other dolphins.

The ear-like fins of this octopus have earned it the name “Dumbo.” The octopus lives at extreme depths of 10,000 to 11,000 feet, searching for worms and other crustaceans at the seafloor.

These herding dogs were bred for the freezing Alps and have evolved to possess thick dreaded coats.

Ankole longhorns and their massive horns have survived in Africa for thousands of years. Their horns are used in defense and cooling and can weigh up to 100 pounds each and reach 8 feet from tip to tip.